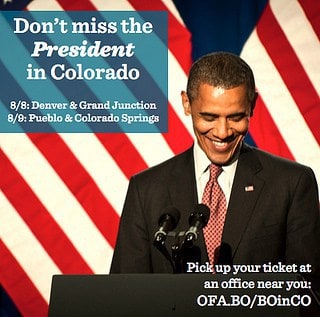 President Barack Obama is going to be in town Thursday afternoon for a campaign event, and one in Pueblo on Thursday morning. Entrance is free for both events. Here in Colorado Springs, the president will be at the Cutler Quad, at Colorado College, and doors open at 11 a.m.
Before that, in Pueblo, the president will be at the Palace of Agriculture at the Colorado State Fairgrounds, and doors for that event open at 8:30 a.m.
Tickets for both events, however, are available today, starting at 5 p.m. They’re strictly one per person, will be handed out on a first-come first-served basis, and have to be picked up in person.
In a statement, the Obama campaign said, “The President will discuss his plan to restore middle-class security by paying down our debt in a balanced way that ensures everyone pays their fair share and still invests in the things we need to create jobs and grow our economy over the long term, like education, energy, innovation, and infrastructure.
“The President will also repeat his call for Congress to act now to give middle-class families some certainty by preventing a scheduled tax increase on 98 percent of Americans, including families across Colorado.”
Tickets for the Colorado Springs event can be picked up at any of the three locations below:
Warner Campus Center
Colorado College
902 N Cascade Ave
Colorado Springs, CO 80903
Obama campaign office- Briargate
7608 N Union Blvd, Suite E
Colorado Springs, CO 80920
Obama Campaign office – Woodland Park
1075 E US Highway 24
Woodland Park, CO 80863
Tickets for the Pueblo event can be picked up at the following two locations:
Downtown Obama campaign Pueblo field office
330 S. Union Ave
Pueblo, CO 81003
Pueblo East campaign field office
1402 E. 4th St
Pueblo, CO 81001
The Denver Post has details about Obama’s visits to Denver and Grand Junction on Wednesday. Check it out here.